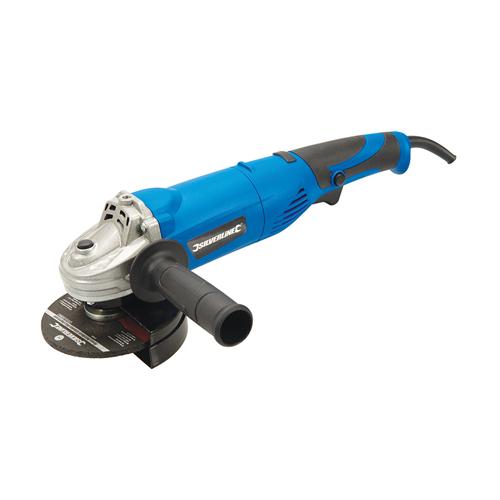 4 average based on 48 reviews
See all reviews
;
48 recenze/í

Make the daily grind easier with 950W of power from the Silverline 115mm Angle Grinder. Compatible with a wide range of 4½" cutting and grinding discs, its 11,000rpm no load speed allows cuts in metals, tiles, cement and even concrete.


Users have commented on the great control afforded to them by this 115mm Angle Grinder, mostly due to the slightly longer than usual base, which enables good grip with both hands. The additional 3-position side handle gives even more leverage and control where extra pressure is required on harder materials.


This particular model comes with two separate safety guards - one for grinding discs and one for cutting, which are specifically designed to minimise the chance of user injury, as well as to block flying debris.


As well as the specialist safety guards, the Silverstorm grinder features an impressive 2-stage on/off switch, which eliminates the risk of accidental engagement of the blade and therefore the possibility of damage or injury. A spindle lock feature will, when engaged, stop the blade from spinning and provides an added element of trust when removing and replacing blades.


At just 1.9kg, the Silverline 115mm angle grinder is highly manoeuvrable, allowing you to get into an efficient rhythm when hard at work. Why not add an accessory kit to your order, like Silverline's (code 633831), which includes cutting and grinding discs as well as a crimp cup, crimp brush and flap disc, to far increase your working capability. 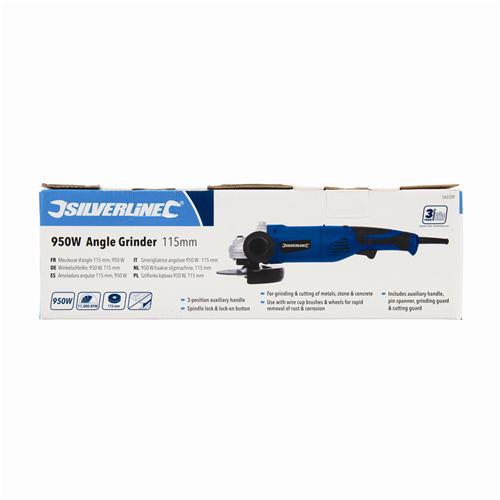 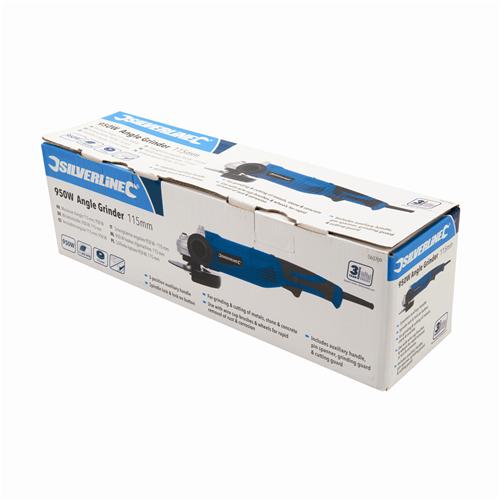 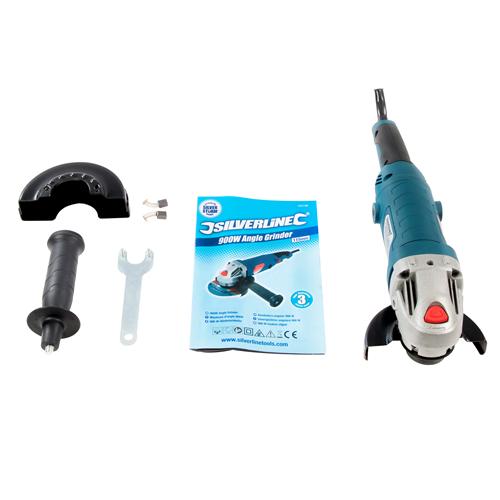 I bought this to replace an inferior B&Q product. I like the switch mechanism and easy to use.

Used it many times now,seems very powerfull for its size and is comfortable to use,would recommend to anyone.

This is my second silverline grinder, first one still going strong after 4 years hard work. It has now been passed to another family member

Light, easy to use, poweful enough for most jobs

Good value grinder for grinding cutting or polishing suits me perfectly.diy /hobbiest.enough power for my needs.

Bought this when I had some floor tiles to lay. Was absolutely perfect for cutting and trimming them. This will be getting a lot more use in the future. Great value and well made.

I have found the angle grinder very easy to use as a trigger switch is much easier than a press or slide button.

Have bought power tools before from Black & Decker, Von Haus and Bosch. They have scored high in one area, and disapoint in another. Silverline has set a new standard, and they back it up with a 3 year Guarantee. Great solid build quality, and confidence that I shalln''t need to fish for the receipt within a hand-ful of uses as I have had to do with other. No swipe left here! ( Thanks reddit for the info on tinder/grinder! )

My first impression of the Grinder is the styling of it being more like the bigger 230mm machines. It feels much better balanced than most other 115mm Grinders. 950w is sufficient power for most uses and will certainly be enough for me. The 3 year guarantee is also good to have.

Had this about 6 months now and used quite a lot, changed the blade twice to give you an idea of how much I have used it. The unit it good, well balanced with acceptable vibrations and tacked all my jobs very well with the correct blades. I was disappointed with the 2pin plug converter to UK 3pin, actually think it is too dangerous, so I cut it off and replaced it with a solid UK 3pin plug.

very good value for money, handy tool to have.

Great tool for the price.

Great grinder easy to use

The 900w Silverline angle grinder I got as a birthday gift was a very welcome present until I tried to use it . On the second minor DIY job it not only blew but blew my home fuse box.I contacted Silverline ''customer services'' and they arranged for me to send it back to check. Shortly after a replacement tool was received which so far works very well. In short the service from Silverline and especially the customer service team (Roxy) was GREAT and I would highly recommend this company again for it''s customer care attitude. Well done !

Worked great for 18 months then gave up the ghost

It''s a nice item but I was using it and it seemed to judder and a lot of smoke gushed out of it, So I stop using it for a wheel and now it seems to be ok??? But the ballerinas seem now to be plying up, I''ve been in touch with you about it but have not heard back from you, it''s a nice machine But!!

Happy with it so far. A lot better then the one I had before.

This is a fantastic grinder, Powefull so the task get''s done faster but still fairly light with nice soft grip handles just in the right place for confort, Not too noisy a motor, Easy to change the discs with just one key. I would recomend this grinder to anyone. Now & Ned Prep.

the grinder has worked fine, with extended continual use cleaning off old paintwork from metal . easy to use.

Very poor quality, used once, tried to change blade,flimsy brake button popped off and lost,making product useless, but not worth returning for repair either.

Excellent product for the price, ideal for what I needed, certainly recommend

cheap and good, i use one to cut and this one to sand down so no need to switch wheel

It''s still working 18 months later after some heavy work which is a bonus compared to some cheaper brands. No requirement yet for any maintenance. I would have no problem replacing like-for-like when the time comes for a replacement.

Purchased after seeing reviews of other similar products, (and of other Silverline products) to replace my old budget! angle grinder, which has given many years of trouble free service. I''ve only used this tool on a few occasions so far but it appears to be robustly made with plenty of power for the jobs done. Fairly heavy but handles well when in use. Pleased with purchase so far and would be happy to look at other Silverline tools in the future.

The 2nd time I used the angle grinder it stopped working after 2 minutes, I didn''''t bother to send it back. This is the only Silverline tool I have had a problem with, every thing else has been great apart from the angle grinder.

I use this grinder every day. It has proved to be a reliable and essential part of my tool kit.

A smashing little grinder which is great value for money. Powerful and versatile does what the competition do at a much better price. Highly recommended.

Had this tool for quite a while now & its done a lot of heavy work & is still going strong. Normally we would have seen off one or two of its competitors by this time but not with this one. Bought only as a gap-fill but well impressed.

Very good power, comfortable to hold and use. Ideal for any small job.

The old adage "You get what you pay for" - but actually, I was pleasantly surprised with this product. It''s fairly well made. Balanced well when using. I''m pretty pleased with it.

Excellent piece of equipment. More than capable of carrying out its job.

Great purchase used it to cut up old disability ramp at my back door,went through it like a hot knife through butter,tubular steel,flat steel bar, angle iron,the lot,saved as load of money doing it myself and I''''''''m sure I''''''''ll find more odd jobs for it.Good powerful motor and great value tool.

I have had quite a few tools from silverline a good product.

Main issue with the grinder is the button to lock the output doesn''t work very well, so changing discs is a greater effort than it should be.

Not used it much, but did the job well - worked as expected. Comes with spare brushes which is thoughtful and a 3 year guarantee for peace of mind.