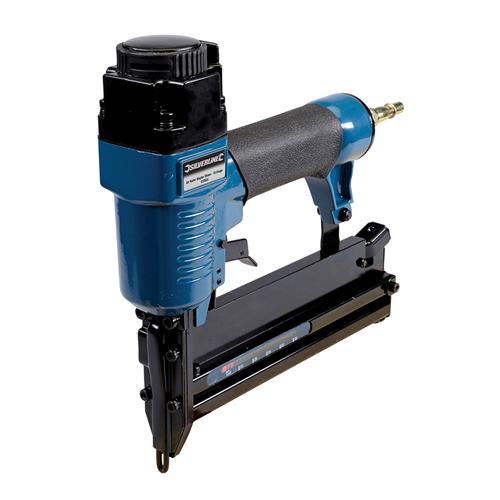 4 average based on 22 reviews
See all reviews
;
22 comentarios 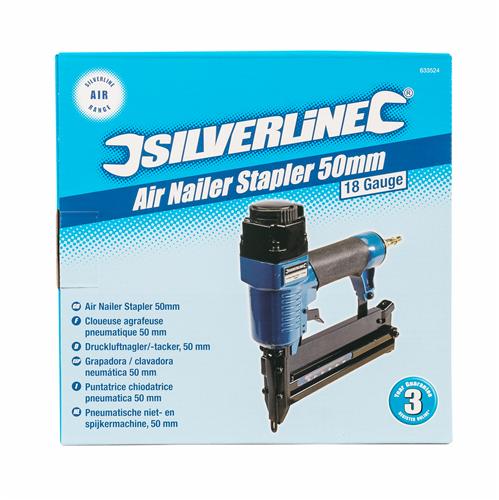 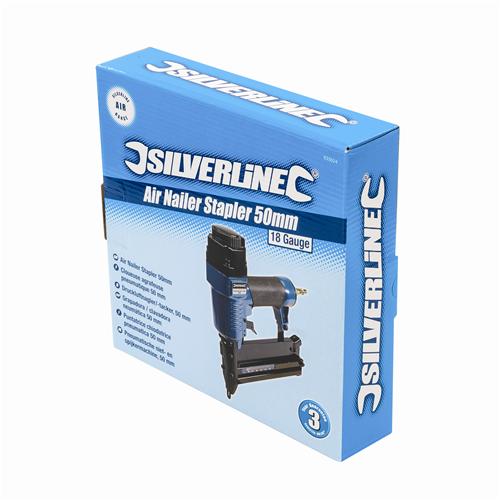 I bought this to go with my new Stanley 25 litre air compressor to make some trellis, I had already ordered a Stanley air nailer from another supplier but I thought I would take a chance on an inexpensive stapler. This is a very inexpensive nailer and stapler, the build quality is basic but it is mostly metal and surprisingly robust. It does not have a rubberised end so it does mark your wood, not a problem with trellis. The trigger is very crude but works and it has a bsp male connector, not a euro fitting, which I have simply swapped over with a less used tool as my compressor has a euro connection. I had a complete nightmare loading this with Silverline''s 90 staples as the minimal instructions assume you will magically know how to do this. For some reason I couldn''t get it to work hanging the staples over the bar and decided you needed to put them inside the loading mechanism. Do not do this as it will jam and you will learn how it is all put together when you have to dismantle it. This is surprisingly easy with the Allen keys provided and once dismantled and put back together and putting the staples exactly where I had initially, hanging over the bar, it worked perfectly. I have now extensively stapled some pine trellis, with out any jamming and I now know how to dismantle the firing mechanism if it does jam. Comparing this with the Stanley which is almost three times more expensive it is clearly more crudely made but it works well. I have not tried it with nails but suspect it will work fine. If you want something for fine woodworking, with rubberised handles and fancy triggers and a case this is not for you but if you want something for more rough and ready work you cannot go far wrong for the price. I would have given this five stars but the instructions are pretty poor and for some reason it did not work until I had taken the firing mechanism apart and put it back together. However I will give it four stars because of the satisfaction of taking it apart and putting it back together and it working and the fact it fires staples very effectively.

Air Nailer Stapler 50mm 18 Gauge.. great little nailer works great and does a good job..no issues and for the price is a good tool for anyone''s tool box.

I have several silverline tools and none have let me down, the nail gun is light and easy to handle and use and a great price.

Very well made product. Works very well better than some dearer makes.I used this for 4 hrs the other day and didn''t jam once. Really pleased. Would recommend to all.

Only used a couple of times but works perfectly. Strong impact and has yet to misfire. Cannot complain. Simple to use.

Absoultly over the moon with this nailer it does what it is supposed to do ..3 year warranty what more can you ask ..i would highly recommend this to anyone who wants a quality bit a kit that won''t break the bank ..

Wow amazing quality.build is solid yet comfortably sits in your had .does the job with ease and you get a 3 year warranty wow ..this is my first ever silverline tool and folks please give them a try ..im an occasional tool user as my hobby is woodwork and yes I would highly recommend you try them .

Used to have an electric nailer which was rubbish. Bought this without expecting too much because of the price but very pleasantly surprised. Seems solid and well made and worked perfectly out of the box

Very nice product, good quality finish and very robust body, drives a 2” Brad nail right in to solid wood and countersinks its head beneath the surface, hard to beat this product at the price.

I own a number of Silverline tools and have always found them well made and very good value for money, but by far my favourite of all is my Silverline Air Nailer. I had owned it for several years and it had given a lot of good trouble-free service in that time, so I was devastated when it finally failed a couple of weeks ago. I went straight online, and found a merchant that was selling the exact same model, and put in an orde. It arrived two days later, and was put immediately back into service. I am happy again now !

I purchased the 50mm gun at £27, and find it a fair price, and am more than pleased with its performance......

I had a Tacwise electric nailer and had problems from the beginning so my wife bought me this nailer and a small hobby compressor for my birthday and the 2 work perfectly together. I thought Silverline tools were cheap because they were poor quality but this nailer is great. I have used 25, 38 and 50mm brads and get a great finish by simply adjusting air pressure.I''ve used this a lot in the short time I''ve had it and only wish I''d got one sooner. If you are on a tight budget give it a try, you''ll be glad you did.

I bought this to make up bird nesting boxes and feeders. It performs even better than I hoped it would. Great product and great quality. Great Job Silverline

Nicely weighted nail gun , sits well in the hand and does what it says on the tin with honours

Great bit of kit easy to use.